Iberia and Aeromar have renewed their interline agreement in order to offer their customers the possibility of booking tickets connecting the 100 destinations that the Spanish airline operates in Europe with the 18 that the Mexican company offers in their country.

The renewal of the agreement will continue to facilitate the booking of the travel itinerary on a single ticket, under the same baggage policy and uniform fare conditions. They can be purchased on the Iberia website and through travel agencies.

For the flights between Madrid and Mexico Iberia has programmed its most advanced and quietest aircraft on the market, the Airbus A-350/900 equipped with 348 seats -31 in b-classusiness, 24 in tourist 293in tourist – and that offers advantages such as high-speed wifi, panoramic windows, wider corridors and higher ceilings and an air renewal system that improves humidity levels. Aeromar, in turn, is a recognized operator of the ATR 600 series, a reference aircraft for regional aviation worldwide. 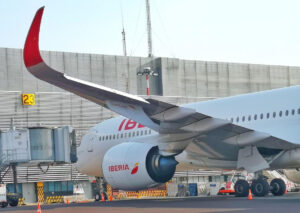 The agreement between Iberia and Aeromar means that the entire itinerary can be booked on a single ticket.

“At Iberia we have always been committed to Mexico as one of our strategic markets from the point of view of both tourism and business traffic. Since September, we have increased frequencies to 14 weekly flights which, together with the agreement with Aeromar, allows us to offer a better service to our customers and a wide range of destinations within the country,” explained Victor Moneo, Director of Latin American Sales and Institutional Agreements.

Fabricio Cojuc, Aeromar’s Director of Network Strategy and Alliances, said that this alliance “is an important part of our growing portfolio of interline agreements with first class international airlines operating in Mexico”.